Choose the Best Income-Driven Repayment Plan for You 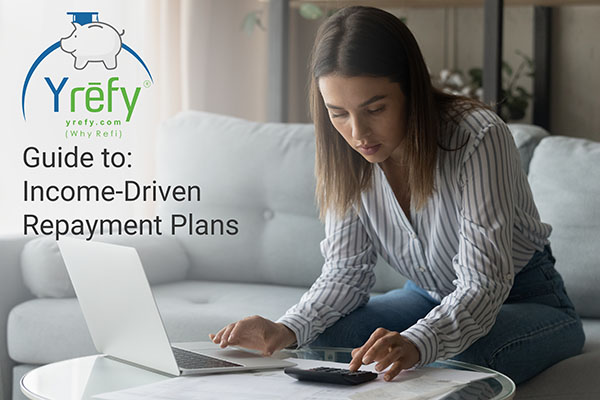 How to Choose the Right Income-Driven Repayment Plan

Regardless if you have graduated from college or have been taking courses here and there in hopes of completing a degree in the future, more than likely you will have student loans to eventually pay back.

According to statistics provided by the U.S. Federal Reserve and the Federal Reserve Bank of New York, the graduating class of 2019 had 69 percent of the college students averaging a student loan debt of $29,900. In addition, 14 percent of the parents of these college students took out loans averaging $37,200 to help out their college-age children.

The Interest Will Cost You

A college graduate with approximately $30,000 in student loans to pay off is quite a sum already to deal with. But once you add the interest on to these loans, the amount increases rather quickly.

If the person hopes to pay off a $30,000 debt in student loans in ten years, their payments would be about $350 a month. In total, the interest they would pay would be close to $10,000 if factoring in the usual interest rates these loans are processed at.

As a young person with a college degree just setting out on their own two feet, this kind of debt could lead to them living in their parents’ basement for the foreseeable future. Car payments, insurance, and student loan payments could consume a good chunk of a paycheck. Trying to squeeze a house payment or rent for an apartment might not work within the confines of a starting wage in your career of choice.

This is merely one reason many people with student loans are considering pursuing an income-driven repayment plan. These plans take into account how much the person earns a month and then adjusts the loan amount accordingly. Plus, if there is still a balance left after 20 to 25 years of income-driven student loan payments, the rest of the debt will be forgiven (even though there could be a tax on the rest of the amount owed).

This type of repayment plan could still allow the person to live a life without having to worry about their student loans burying them in debt. As you can see, it may just be attractive enough to college graduates with their eyes on the bottom line.

With four types of income-driven repayment plans, there are options to choose from and each one can offer something slightly different than the rest that could make it ideal for your current situation.

The income-contingent repayment plan was the first one of its kind created back in 1993. The Federal Direct Loan program examines how much the person is currently earning a year and adjusts their monthly payment plan according to the funds coming in and not on how much they currently owe in debt. This allows the individual in debt to maintain a standard of living regardless of how much they owe.

Unfortunately, out of the four programs, the ICR usually has the highest monthly payment attached to it. Predictably, this also makes it the least popular of these income-driven plans.

All of these plans center around the term “discretionary income”. To put it simply, discretionary income is the money left from a person’s income after paying for the necessities every month such as shelter, clothing, food, insurance, taxes, and other essentials.

Any of the money earned over the poverty line under the ICR plan qualifies as discretionary income with 20 percent of it going monthly towards repayment of the loan.

A portion of the current poverty guidelines is bulleted below.

To follow with the example stated above, an individual who has $30,000 in student loan debt could well be paying $350 a month under the normal repayment plan. Under the ICR, if that individual is a one-person household and earning $28,000 per year, $12,880 would be subtracted from their income for the necessities. This would leave $15,120 left as discretionary income for the year.

Keep in mind, though, that this monthly amount is not locked in forever. As the person’s income increases, so does their discretionary income and the amount they are paying towards their student loan will eventually increase as well.

If after 25 years of payments (300 payments in total) there is still a balance left to the loan, it will be forgiven under the ICR plan. However, the amount forgiven is taxable and will cost you on your tax return for the year.

The income-based repayment (IBR) plan differs from the ICR in a couple of significant areas. For most people with student debt, the IBR will be a better overall deal for them. However, this repayment plan is more difficult to qualify for as there is limited eligibility, so apply early.

This means that for a one-person household, the discretionary income would be anything over $19,320 instead of the $12,880 that it was based on for the ICR. If we stick to the above example of a person earning $28,000 a year, only $8,680 would be discretionary income. And at 15 percent, the monthly payment would only be $108.50 (which is usually doable on even the tightest of budgets).

After 25 years, which equals 300 payments, the rest of the loan will be forgiven if there is still debt. Once again, it is taxable though.

Another option is the pay-as-you-earn repayment (PAYE) plan. Essentially, it is the plan that will save people the most money in the short and long term.

PAYE only requires 10 percent of the discretionary income, and just like the IBR, the discretionary income is based on one and a half times the poverty line figures. Once again, if sticking with the example from above of the person earning $28,000 a year and from a one-person household, the monthly payment would be approximately $72.33 towards the college debt.

As a bonus, if after 20 years, 240 payments, the debt has not been fully repaid yet, it will be forgiven. In addition, under PAYE, if the person starts to earn more money, their monthly student loan payment does not increase and will be capped at the original amount.

The PAYE program created by the government had many people scrambling to take advantage of it, but with the limited eligibility, people were clamoring for another option that will work for them.

In response, the government created the revised pay-as-you-earn repayment (REPAYE) plan. While it is not as sweet of a deal as PAYE, it still is nothing to scoff at. The REPAYE plan still is based on 10 percent of the discretionary income and the discretionary income is calculated the exact same way by taking the poverty line figures and multiplying them by one and a half times.

One of the major differences though is that the monthly loan payment is not capped any longer. As a person’s income increases, so does their loan payment. And if the debt contains any graduate student loans, then the repayment term is 25 years instead of 20, 300 payments, before the loan is forgiven if there is still debt.

Apply Early and Determine Your Eligibility

These are the four income-driven repayment plans that are currently available. However, do not wait until debt has already consumed you before you apply. And keep in mind that any program funded by the government could have its funding decreased or even eliminated, so once again, apply early and take advantage of these programs while you still can. Fill out an application on studentaid.gov and see if you qualify!

Professional researcher and writer that specializes in finance and education. Ryan also teaches at the college level and has won many writing competitions.